To see photos shot with this camera, click the appropriate Category link at right.

The Olympus Trip 35 has such a following by ‘trippers’ that I had to find out why people love it so. After carrying it around in a jacket pocket and snapping away with it, I’m starting to understand. It’s a small, lightweight, easy-to-use camera capable of taking great photos. The only difficulty is guessing at focus distance, since it has no rangefinder. Other than a few out-of-focus shots due to this, the results I’ve gotten have been great. The simple auto-exposure system works great. The lens is relatively sharp. Colors look great.

While lightweight, it has a fairly solid feel to it — not too light, not too much plastic (actually there’s very little plastic on it, except for a few small parts like trim around the viewfinder window — it’s almost all metal and feels very solid despite it’s light weight).  It’s small enough to carry around easily, and I especially like that the lens doesn’t stick out too far from the body.

The f:2.8 Zuiko lens is a nice wide 40mm, which is a nice departure from most of my other 35mm viewfinder and rangefinder cameras that have 45 or 50mm lenses.  It’s a great focal length for wide landscapes, street shots, etc. 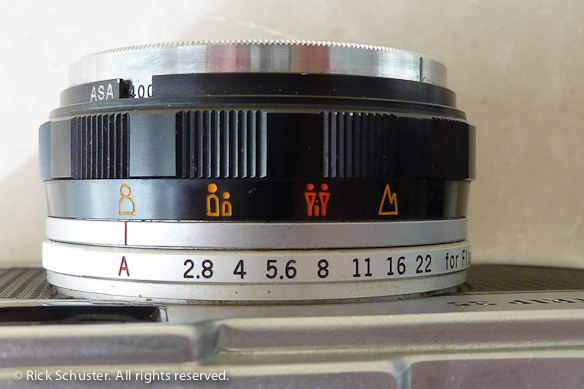 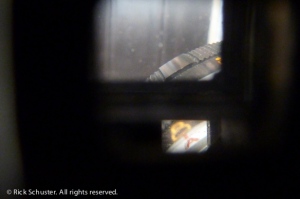 the view though the viewfinder looking downward to see how the lens is focused.

Shooting is pretty easy.  Set it in “A” for Auto (after setting your film ASA on the lens barrel), set your focal distance, and fire.  The lens includes little icons for various focal distances — a head for close-up, two people, three people for small-group distance, and a mountain for infinity.  A cute little feature is how you can look down a bit as you look through the viewfinder and see a little window showing the symbol for where you’re focused. I don’t find the feature real useful, but kind of cute nonetheless.

The light meter surrounds the lens and is powered by a selenium cell, for completely battery-less operation.  I guess some old Trip 35s have burned out light meters, but mine works great.  Keep a lens-cap on it to keep the meter working longer.

Looking forward to shooting more with this.  I think because of it’s compact size and ease of use, it’ll be in my jacket pocket now and then.

Ken Rockwell has a page about this camera where he compares the lens sharpness to that of a high-end Canon “L” series lens, with surprising results.

On the bottom of the lens barrel are markings in feet and meters for more accurate focusing.

The simple diamond-shaped two-blade aperture opens to the appropriate size as you push the shutter button half-way down, and locks in place if you hold the shutter at half-press (this could allow you to do some exposure compensation by purposely pointing toward a lighter or darker area for the exposure, pressing half-way, then recomposing your image).

If you need to make repairs (I didn’t), this page seems to have some good info.