Just a few more snow photos from the second roll of film shot that same day. 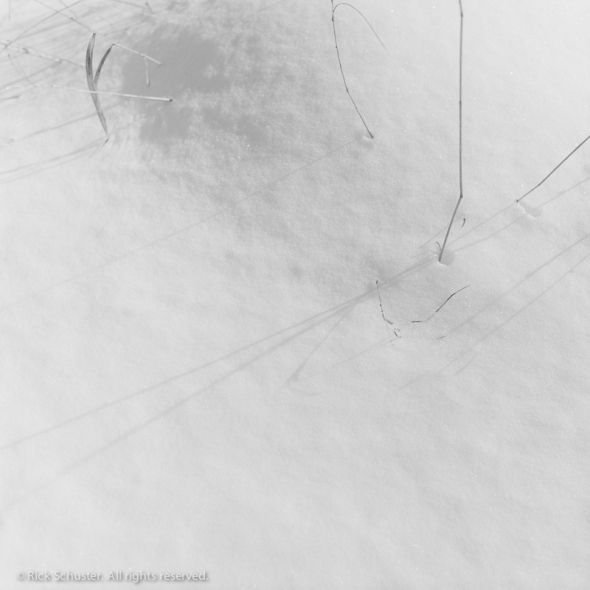 A nice snowfall recently gave me the opportunity to take a walk and give my Rolleicord some much-needed exercise. 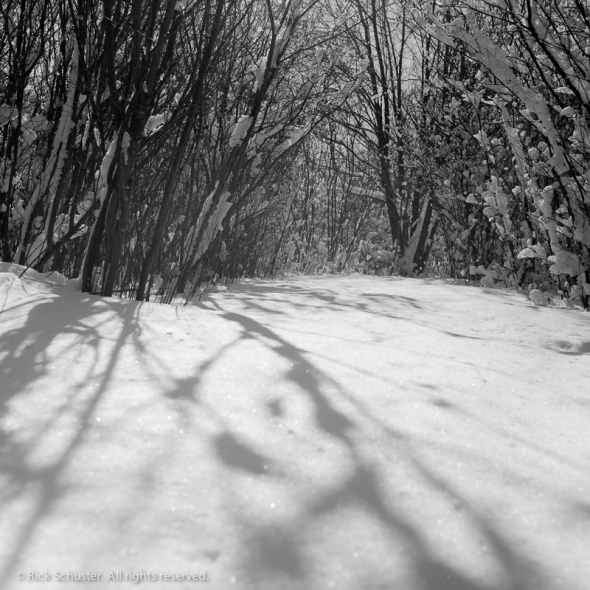 Not terribly exciting photos, but it was fun shooting them and developing the film at home. I guessed at the metering using the sunny-16 rule, and it worked well. The film did a nice job picking up the subtle detail in the very bright sunlit snow (while remarkably still holding shadow detail as well).

I just developed a second roll shot on this same walk, and that’s now hanging to dry. Will fire up the ‘scanner’ again soon.

A few weeks ago we spent a nice evening walking around Como Park taking photos as a family.  My wife wanted to learn to use our Fuji X-T1, and my son was carrying my old Canon DSLR, so I went old-school and carried my Rolleicord.  After our picnic dinner on the lawn, I loaded a roll of Fuji Acros 100 black and white film, and we set off for the Conservatory.  We intended to go inside the conservatory and back out to the beautiful Japanese garden, but found that both were closed for the evening, so we just walked around the park.  With all of us taking photos, I enjoyed for once not being the one slowing down the rest of the family.  I had no trouble finding subjects for my 12 images on my roll of film, and enjoyed the slow process — if I would have been shooting digital I probably would have taken a hundred shots and ended up with about the same number that I liked. 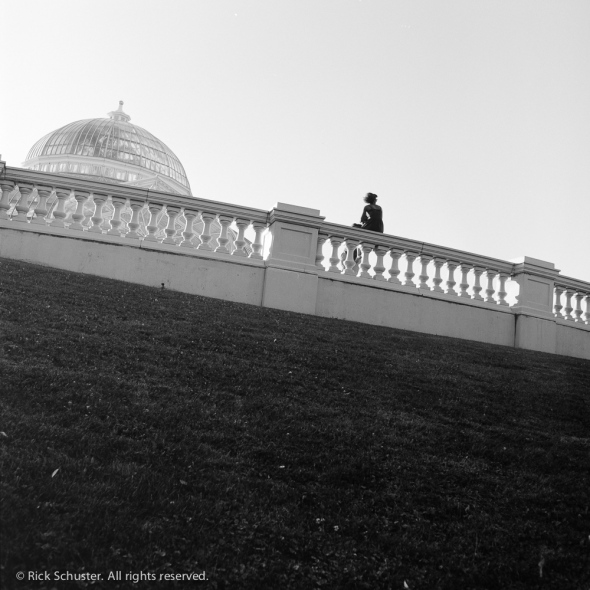 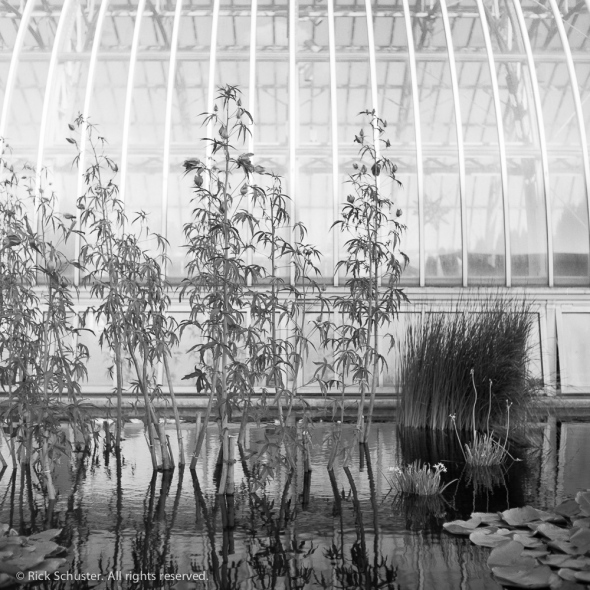 I developed the film myself the night before last, which was quick and easy since I had chemicals premixed and ready to go. This is the first time I’ve developed 120 film, and it’s even easier than 35mm because you don’t have to mess around with opening the film canister — you just unroll the film right off the spool (inside a dark-bag) and onto the developing tank reel.  I let the film hang to dry in an unused room where it’d be unlikely that much dust would be flying around in the air, then last night I “scanned” the images.  I say “scanned” in quotes because I actually shot photos of the negs using my X-T1 with an old Micro-Nikkor 55mm manual-focus macro lens.  The process was quick and easy, and the results are stunning. I’ll be writing a post soon about my process. 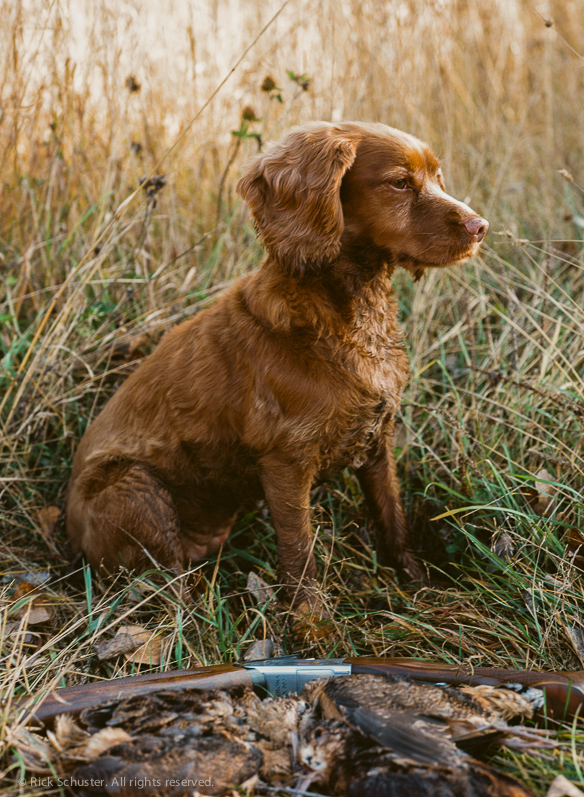 While grouse hunting in October in northern Minnesota, I created this image of birch trees against the fall foliage by purposely panning the camera vertically hand-held. I think it was about a 1/2 sec exposure with fairly fast panning. I only shot one of these and didn’t know how much blurring would occur. The resulting image has a really interesting look that is not quite what I expected, and is different than what I’ve gotten doing similar shots with a digital camera.

Shot with my Mamiya 645, of which I have not yet written a detailed review. Nice camera though. Info to come.

Shot on Kodak Ektar 100, developed and scanned by Precision Camera (see previous post). The image below is a crop of part of the same image to show the detail of the very interesting and pleasing blur. I could probably crop a whole series of interesting images from this one shot.

While I’m at it, why not crop in tighter to show you the film grain captured in the scan: 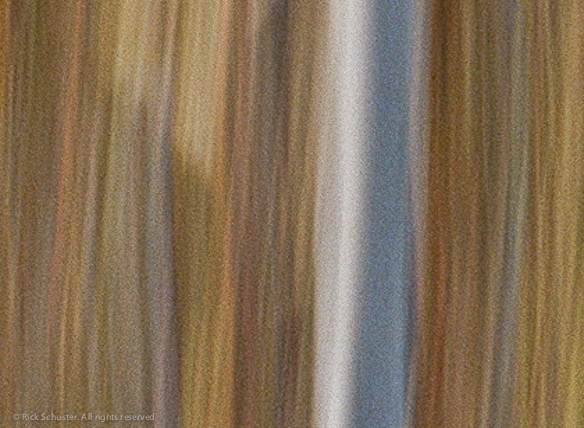 Another Nordeast stroll with the Rolleicord III 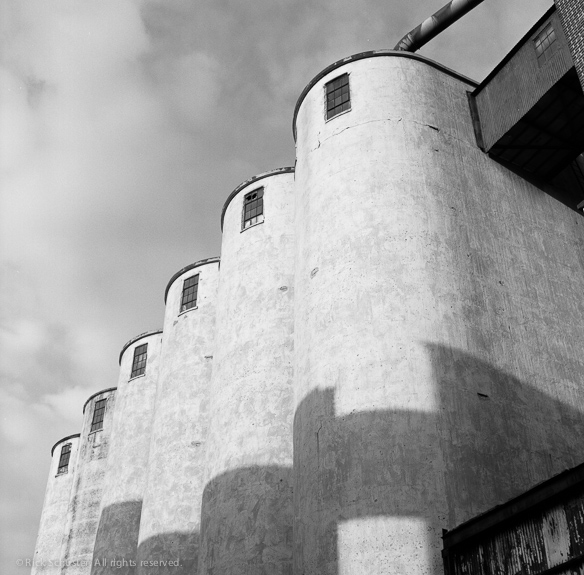 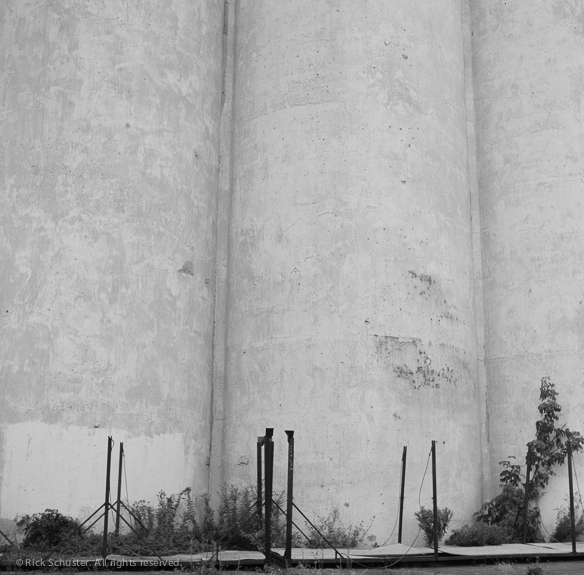 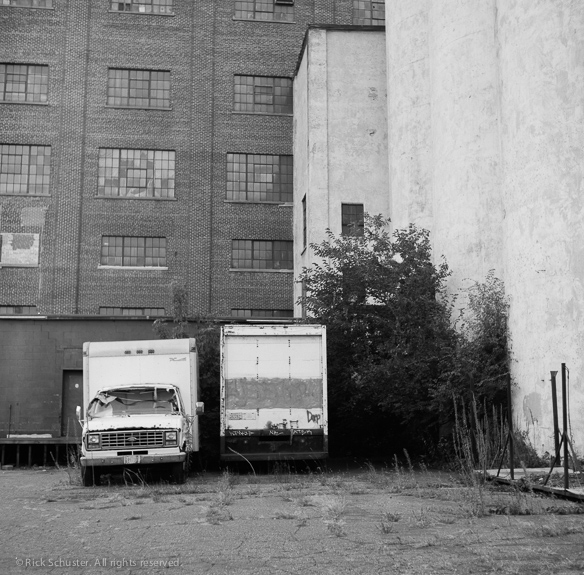 Shot on Fuji Neopan Acros 100 film with the Rolleicord III.

You’ll recognize this location if you’ve read this blog before.  It’s an area in NE Minneapolis where I sometimes have a little time to walk around while my son is in a class.  For me this is an unbeatable location for looking for interesting shapes and compositions.  A perfect way to spend an hour on a nice evening is to load up a medium format camera and walk around slowly looking for those twelve exposures to strike my eye.  Having a full hour to shoot twelve exposures is a fantastic exercise in constraint, patience and focus – though when it comes to shooting film that can actually seem like a lot of shots to allow yourself in an hour.

If I’m in the mood for shooting sharp images with a camera I’m fully comfortable with, I usually find myself reaching for the Rolleicord.  Of the cameras I own, it can’t be beat for reliability, sharp optics, solid feel – it’s a camera that builds confidence.

Developed and scanned by Precision Camera and Video in Austin, TX.  This is the first time I’ve tried Precision, and I’m pleased with the results of the scans.  The black and white scans are extremely sharp, though there are a lot of dust spots to clean up (I actually think this is good though, because I think some other shops use dust removal software that results in softer images – in many cases I’d rather do some dust spotting in Lightroom or Photoshop in exchange for the sharpest possible scan where you can really see the film grain when you zoom in).  I also had them do a couple rolls of color and my initial reaction is that they’re a great value for high resolution scans.  I’ve had some experience now with several labs for developing and scanning, and I think I’ll write a little post soon about my experiences and a bit of a comparison.

Industrial color on a gray day

There’s something about gray, foggy, dreary days that make me want to go out and shoot photos.  Just such a day presented itself last spring when there was still ice on the Mississippi River, and the new Lowry Avenue bridge construction was in full swing.  When I went out that day, I had in my mind the landscape photos of Australian photographer Chris Round.  His photographs rarely depict a pristine, unspoiled landscape, but rather they usually involve man’s impact on the land, the man-made landscape, the industrial, the abandoned, the forgotten, the dirty and gritty.  There’s a simple, sublime beauty to his compositions and to the calm colors that make his work stand out among the current plethora of over-saturated photos.  The gray sky, even lighting, and overall muted colors of this day reminded me of his work, and I set out to try to capture some images inspired by him.

When I saw these images yesterday (after sitting on several rolls of film for months and finally sending them to Dwayne’s for developing and scanning), I was really pleased with what I saw.  I think I accomplished my goal of capturing what I was seeing and feeling that day.

These images are from a single roll of Kodak Ektar 100 film, shot in my Rolleicord III. These are the straight scans from Dwayne’s, with no editing done except for my standard Lightroom export, which resizes the images to fit the blog and ads the copyright watermark. 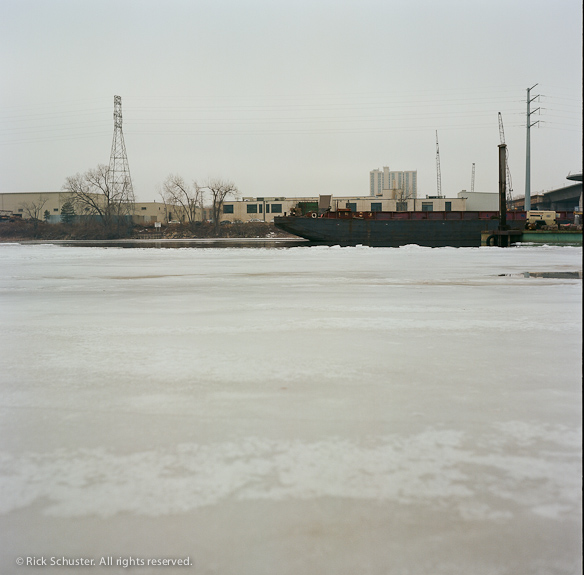