We finally moved to the second part of my son’s photography project – printing photos the old-fashioned way. We’re lucky to have a large laundry room with some kitchen counters (we had a temporary kitchen down there while remodeling our kitchen a few years ago), so it makes a great darkroom.  There were only a couple of small windows to black out with plastic garbage bags and duct tape.  There were a couple of ceiling light fixtures in which we could replace the bulbs with my old safelights.  There were even two separate sections of counter so we could have a dry area for the enlarger and a wet area for the trays, which was very near the laundry sink.  In the sink we rigged up a makeshift print washer by simply setting a very large developing tray on top of the sink, running water into it and letting it run over into the sink.

We started out by making contact prints of his two rolls of film one evening. I had some very old photo paper left from the last time I worked in the darkroom, probably 15 years ago or more. Turns out that unexposed photo paper doesn’t last forever!  The pack of 8×10 Kodak RC paper came out really dark with hardly any contrast, as if it had been fogged. I had a pack of Illford 5×7 paper that fared better, so we were able to piece together contact prints of all of the negs using several sheets of that. I ordered a new pack of Illford 8×10 gloss RC paper and we looked at the contact prints for a few days while waiting for that to arrive.

He settled on a couple of images that he wanted to enlarge, and we got to work. I had forgotten most of what I used to know about chemicals and the timing of developer, stop bath, fixer, washing, etc, so we had to do some research, but it all went pretty smoothly.  We spent a few hours in there to get good prints of two images, but they turned out great. The negs seemed a little low on contrast, so we used a fairly high polycontrast filter to boost the contrast of the images.

The first photo we printed was a close-up of a moss-covered tree with a blurred background of a small stream, shot in the Cascade mountains. We did a test strip to figure out the exposure time, and he decided he liked a pretty dark exposure.  That print went pretty quickly and we had a nice final print in just a couple tries.  I helped him set up the enlarger and focus, then he exposed the print, and I ran the timer while he worked the print through the developing, stop bath, and fixer trays, and into the wash tray.

The second one took a little longer to get the way we wanted it. It is an image of Pike Place market, with sky at the top and the market below. He liked the high-contrast look we got using the polycontrast filter in the enlarger, but it resulted in a washed-out sky when we got the exposure correct on the lower part of the image.  This gave me a great opportunity to teach him about dodging and burning.  We burned in the sky by exposing it for a few extra seconds while I dodged the bottom part of the image, and the building canopy at the right edge.  A few tries and we had a very nice print.

He entered both photos in the 4H art competition at our county fair, and took home a purple ribbon for the Pike Place photo. Being in 4H is what prompted him to do this project in the first place — he thought it’d be a fun project to enter at the fair. Since he won a purple ribbon, he gets to exhibit it at the Minnesota State Fair at the end of the summer!

Aside: Even though the 4H building isn’t one of the most visited parts of the Minnesota State Fair, the fair itself is pretty huge — last year’s total attendance over the twelve days of the fair was 1,824,830 people!  Yes, 1.8 million people.  It’s a big fair.  So I think it’s a pretty big deal that he gets to show a photo there.

I think the print turned out great:

It was a lot of fun, and now that I have some fresh paper and chemicals, I should get back in there and print a few of my own negs. A true silver-gelatin print is a beautiful thing!

Passing along the love of film photography

My 13-year-old son just successfully developed his first two rolls of film.  It has probably been close to 15 years since I developed my own film, so I had to do some research to refresh my memory on the whole process.  I ordered chemicals from Freestyle Photo (Arista developer, stop bath, fixer, wetting agent, Kodak hypo clear).  Once we mixed up chemicals, the process was so easy that I’m now excited to shoot some film and develop more.

He had shot the two rolls of Tmax on a recent vacation using my old Pentax K1000, after he told me he wanted to learn how to shoot film, develop and make prints.  This K1000 was my first ‘real’ camera, a gift from my parents when I was a little older than he is now.  I used it through high school, college and for many years after college until getting my first DSLR.  It made the process even more meaningful to me by having him use that camera.

I taught him how to spool the film onto the metal developing reels, but I spooled these ones for him (inside a changing bag).  That’s something that takes practice to get good at, and I didn’t want to risk these first rolls of film.  Next time he can try spooling his own.  I have one of those plastic spools that you rotate and it pulls the film onto the spool, but I don’t like the tank with that one, so I used the old stainless steel tank and spools.  There’s kind of an art to spooling film on those metal reels, but once you get the hang of it, they work great.

His negs are now dried and hanging in the laundry room.  It looks like he nailed the exposures very well, and has some good negatives to work with.

Our next step is to light-proof the laundry room and set up the enlarger to teach him how to print.  It will be interesting to see how much patience he has for the printing process – and how much patience I have after being in the ‘digital darkroom’ for so many years.

I’m thankful that he wants to learn how to do this. 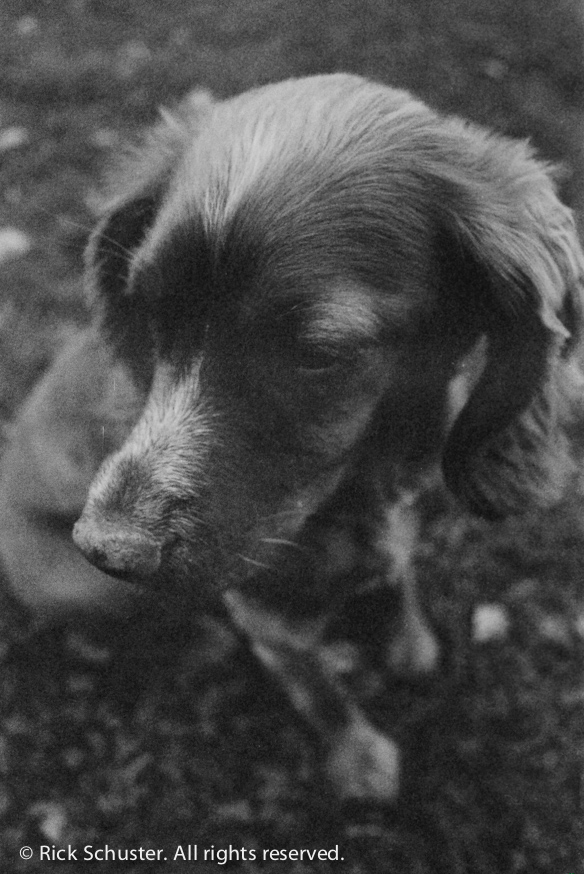 I pulled my old Pentax K1000 off a shelf recently and decided to try shooting it again, only to discover that it still had film in it – it was just sitting there waiting to be used.  I didn’t know when I had last used it, but figured it was around the time I got my first digital camera.  There were still a few shots left, so I put a new battery in the camera so I could use the light meter, shot the rest of the roll and had it developed.  Turned out it was loaded with Kodak Tmax 400 film.  Judging from the age of my son in the shots, this film sat in the camera for about ten years, and no doubt endured some hot weather during that time.  The images on the negs came out extremely thin, like they were severely underexposed, and very low contrast – so that apparently is what happens as Tmax ages. The images that I shot recently were just as thin as the ones shot nine years ago, so it didn’t seem to make a difference if the film was exposed when the film was new, then sat, or if it aged before being shot.  I did some major curves adjustments in Lightroom to pull out these images.  The first two images are old ones, the other two are recent ones.  The image of the leaves has the end of the roll visible at the left edge.

The old K1000 seems to still work great.  I got this camera as a gift from my parents when I was in high school, and I’m sure I’ve shot way more photos on it than any other camera.  Picking it up again after all these years, it took no time at all to feel comfortable shooting it and knowing right where the few controls are (right at your fingertips on a couple simple dials, not hidden inside an electronic menu).

The lens that I have on it is a Tokina f:2.8 28mm that I bought in college.  I had wanted a wide angle lens but couldn’t afford much at the time, and this was a pretty cheap lens — but in my opinion it turned out to be a pretty darn good lens.  I shot for years with that one lens after my 50mm got dropped and broken (it was on the camera at the time, and the camera was fine).  I love the wide angle of that 28mm focal length, and some of my favorite images were shot with it.

I’m looking forward to shooting this camera some more.

I wonder how many half-shot rolls of film are sitting in other peoples’ cameras.  There might be some great family memories just waiting to be developed.