These are from the first roll of film I put through my 1950 Argus C3 “brick”.

I found the camera a little difficult to use, so it didn’t inspire a lot of creativity in my shooting. I was so focused on just getting everything set properly to take a shot, that I found it hard to focus on the image I was creating. The camera is quite capable of taking high-quality images though, and if I were to spend more time shooting with it I’m sure I’d reach a comfort level that would result in better shots.

I was shooting without a light meter for the outdoor shots, simply estimating the exposure using the ‘sunny 16’ rule. They were shot on Kodak Portra 400 (this film’s large exposure latitude no doubt helped with my exposure guesses), and since the max shutter speed on this camera is 1/300 second, most of the outdoor shots were at the smallest aperture of f/16.  The photo of the tomato plant and the close-up of the tree trunk were shot at larger apertures, showing a shorter depth-of-field, and nice ‘bokeh’, or blur quality, from the 10-blade aperture.  The dusk shot with the moon was hand-held at probably 1/10 sec, resulting in some motion blur.

Learn more about this camera here

Shot with the Nikkormat FTn on Kodak Portra 400.  The top image was cropped square because a light leak in the camera caused a streak across the image.  It happened on several images, and I’ve determined that the light leak is from a deteriorated foam seal by the hinge of the back cover of the camera.  It lets light in at the right edge of the camera and fogs the film at the take-up spindle.  I’ll have to work on replacing the seal.  Looks like a pretty easy job.

Another from the Yashica Electro 35 GS , on new Kodak Portra 400.  This has become my go-to camera, it seems. It’s such a versatile, easy-to-use camera, that it has become the one I grab most of the time.  Fast lens, great viewfinder, easy-to-focus rangefinder, and I love the aperture-priority auto-exposure.

The new Portra 400 film seems great, too.  I had read about it’s amazing latitude, so on this roll of film I experimented (very unscientifically) a little bit by setting the camera to higher film speed than 400.  The light was getting low on this shot, and I might have set the camera to 800 ASA instead of 400 to get a bit faster shutter speed, which just means it was underexposed by one stop, and it turned out great.  I know I shot some with the camera set at 1600 ASA, but as I said it was a very unscientific experiment, and I don’t exactly remember which shots I had the camera set at what.  It does seem like a great film, and the high exposure latitude could make it a great choice for some of my other old cameras that may not have terribly accurate shutter speeds. 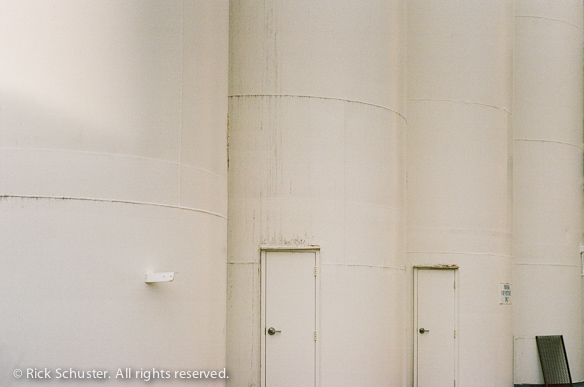 These were shot using a Nikon Nikkormat FTn single-lens-reflex camera, made somewhere between 1967 and 1971. It’s a nice SLR, but I have to get used to the shutter-speed dial that’s on the lens-mount ring. It has a nice bright viewfinder and very nice focusing screen that makes focusing a breeze. The lens I have on it  is the Micro-Nikkor-PC 55mm f/3.5.  I’ve not yet taken advantage of the lens’ macro capability, so I’ll have to try some macro shots on my next roll.

The light-meter system uses the old mercury batteries, so I had to use one of the expensive wein-cell zinc-air batteries to get accurate readings, but the meter seems to work well. It apparently was quite an advanced metering system for the time, the first to utilize Nikon’s later-standard system of 60/40 center-weighted metering. I’ll write more later about this camera when I get around to creating a camera page for it.

I’m getting some odd bright streaking happening on a few shots, seen faintly on the right side of the third photo above. On some images it’s very strong.  I was thinking it was something like the shutter-curtain hesitating while closing, causing the overexposure, but it’s running the wrong direction for that because the shutter moves vertically.  I did have one instance of the shutter sticking open after a shot, which led me to think it’s a shutter problem.  But maybe it’s something else. 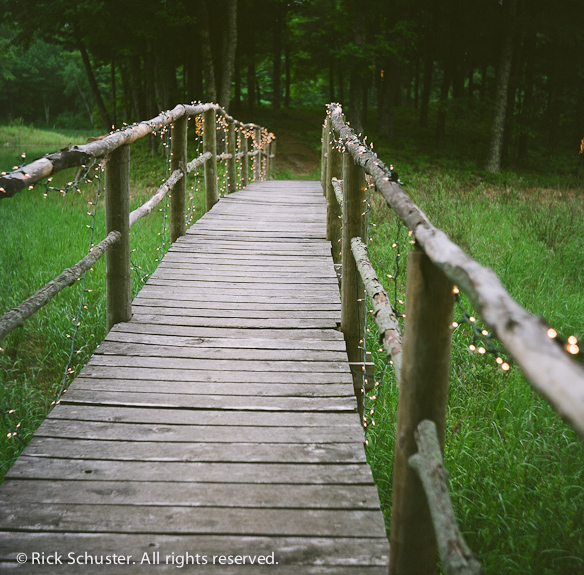 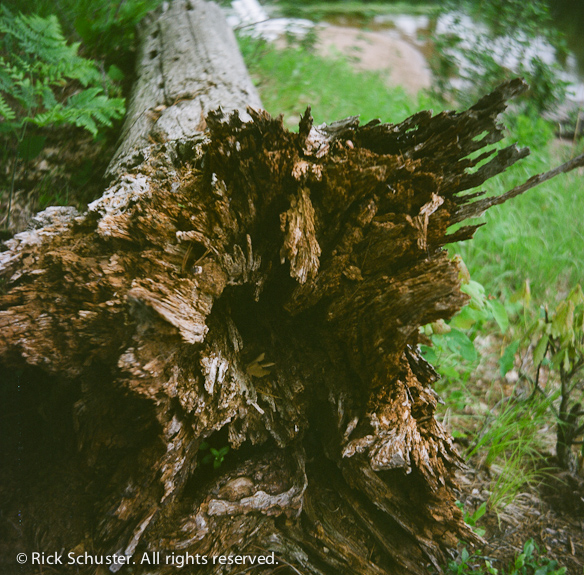 The art-deco bakelite-bodied Argus Argoflex E was made in Ann Arbor, Michigan from 1940 to 1948. It’s a cute little twin-lens reflex camera, with a gear-focusing front element lens similar to the Ricohflex. But based on my first roll of film through the Argoflex, the lens isn’t as good as the Ricohflex.  I’ll add some photos of the camera and more information about it soon.  It’s a fun little camera – nice and light; real focusing (unlike the psuedo-TLRs like the Duoflex from Kodak), 1/10 – 1/200 sec shutter, plus B and T; f/4.5 to f/18 75mm lens.  It’s made for 620 film, but a nice thing about it is that 120 spools will fit. In the take-up spool position, the 120 spool is a bit tight in mine, so winding the film takes some force. But the supply spool area holds a 120 spool nice and loosely, so even though it seems like you’re forcing it to wind, the film shouldn’t be under any stress or extra tension.  I ran my first roll through with a 120 roll of film in the supply side (bottom of camera) and an old 620 spool in the take-up position just to make sure things went smoothly.  It’s easy to come by 620 spools if you find some old brownie cameras at rummage sales (they’ll usually have one spool left in the camera from the last roll of film shot), and you can just ask your processor to return the spools to you.  I haven’t lost one yet.

In this first roll of film I found that the lens produces very low-contrast images.  I had to boost the contrast significantly in Lightroom, but was able to get decent images out of it.  They have a slight softness to them that’s kind of nice.  More about – and from – this camera to come.

Shot with the Yashica Electro 35 on Fujicolor 200, converted to black & white in Lightroom.